In today’s listening&speaking class, as I shared with my classmates, the video I watched last night at TED-A Boat Carrying 500 refugees Sunk at Sea, the story of two survivors. I watched it twice and got emotional twice.

In a overloaded boat carrying 500 Syria refugees who tried their best to flee to a safe place-European country, escape from the lasting-four-year war, and find their hopes to start their new lives. They had to risk their lives to across the sea to reach Italian border. But at last, there were only 11 people survived out of the 500 people. The video was about the story of two survivors, one was a 19-year-old girl Dowia who can’t swim, and the other one was a 18-month-old baby girl Massa ( the right one in picture 2).

Dowia lost her love in this risky trip, she saw her love sunk before her eyes….

After four days floating at sea with no food, no water but sickness and fear, they were found by a searching boat, when they were sent to hospital, they were almost dying. 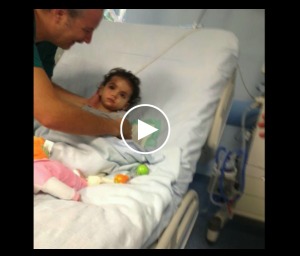 However, finally, the little young life survived, everybody was excited, in such a environment with no water, no food, no clothes, floating in water for four days, Massa survived!!

3 thoughts on “A video about refugees”